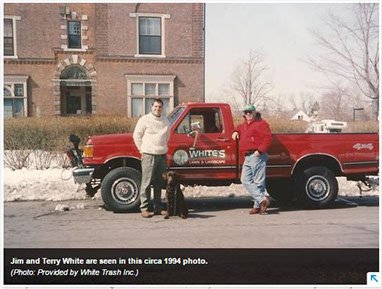 When Jim White began mowing lawns at the age of 14, he had no idea that it would lead to a life-long career.

Beginning with the yards of his grandparents and relatives, the Greece resident gradually expanded his landscaping clientele, continuing the enterprise as a side business while studying to become an English teacher at Monroe Community College and The College at Brockport.

By the time he graduated, he realized that he liked being his own boss and shelved his teaching aspirations to focus on his landscaping company, which he launched in 1987.

Jim called the venture White Lawn and Landscaping before renaming it T.A. White Turf and Transfer after his father, Terry White, who, along with his grandmother, provided the young entrepreneur with the necessary startup costs.

Four years after investing in the business, Terry White retired from his job and joined his son’s team.

The family business provided full-service landscaping to both residential and commercial clients in Greece, including Chase Manhattan Bank and Wendy’s. Over time, the firm expanded from lawn care and snow removal to also renting dump trailers to local contractors.

But as the company’s services expanded, White grew increasingly frustrated by the difficulty he was having finding dependable seasonal labor. Deciding to return to his initial career choice, White began teaching technology at Greece Athena and Greece Arcadia, all the while keeping his business on the side.

The year-long experience reinforced to White how much he enjoyed the freedom of working for himself, and he dove back into his business full-time in 1999, opting to sell off the landscaping division to focus on dump trailer rentals and waste disposal.

Since T.A. White Turf and Transfer didn’t have name recognition in the waste removal world, the business was re-branded White Trash Inc.

“It’s a name that definitely works.” White admitted. “People are sometimes relieved when they find out that that’s our last name and that’s the reason behind the name.”

Now renting roll-off trucks and roll-off dumpsters in addition to dump trailers, White Trash Inc. primarily serves home improvement contractors, but has also built up a retail base. In addition to equipment rental, the business also has recently started offering labor to help with clean-outs.

Because the company offers a multitude of services, White has been able to provide family members with jobs whenever they’ve been in need of work. In addition to his sister, who does much of the bookkeeping, brothers-in-law, cousins and White’s 14-year-old son have all been employed with White Trash at one time or another.

White’s son has already expressed interest in carrying on the family business. White notes that he is trying to teach his son “a good work ethic and good work values,” but does not want to sway him in any particular direction.

White nevertheless feels proud that he is able to offer his son the same kind of entrepreneurial opportunity his own father afforded him.

“My father always wanted to do his own thing but never really had anyone to back him,” White said. “I’m very fortunate that he saw enough in me to say, ‘Hey, I’m going to do something for you that at the time no one could really do for me.’ That’s the reason that I am where I am.”

Morry is a Rochester-area freelance writer.

To learn more about what makes White Trash Disposal the smart choice for dumpsters and waste removal in Rochester and the surrounding region, get in touch today. We can be reached by phone at 585-747-7445 or via email through our website’s short contact form.